St. Francis Xavier Girls’ High School, started in 1889, is the first institution owned and managed by the religious community of the Sisters of St. Joseph of Tarbes (S.J.T.) located at St. Joseph’s Convent, Bangalore. The Congregation of the Sisters of St. Joseph of Tarbes was founded in France in 1843, by six young girls who had a special experience of God, urging them to live together a life of Contemplation. In the years that followed, the congregation witnessed incredible growth in quality and quantity and took up education as a service to the European girls in the beginning, later opening its doors to the Anglo-Indians and the vast Indian population.

The Journey of a Lifetime

How it all began

The privilege of a good education is one of the greatest gifts of God offered through devoted individuals to those in need. Without educators, who are visionaries, it is impossible to build a great institution. In 1886, the prime movers and the leading lights, Bishop Coadou with the persistent efforts of Fr. Jansoone authorized St. Joseph of Tarbes to take over the St. Francis Xavier Primary school.

Sisters Anna Marie, Julie Marie, Marie Henrietta, Marie Dolores, and Marie Beatrice after qualifying for their teaching apostolate in England, took up the baton and metamorphosed into the architects of St. Francis Xavier’s parish school on 3rd June 1889. Thus a voyage rooted in faith and sacrifice commenced and what ensued was a story for generations to remember.

The sisters met with tremendous difficulties which they faced with profound conviction and enormous sacrifice, all the while never complaining and in efforts never waning.

In the early years, the sisters admitted only European and Eurasian girls. The beginnings were marked by the seal of suffering. There were many restrictions imposed on the sisters. The school would remain a lower secondary school. No music lessons were to be given and no boarders were to be taken.

Sr. Julie Marie was appointed Head Mistress on 9th Sept 1890. The original site soon proved too small for the rapidly growing school. Rev. Mother Anselm and Bishop Kleiner of Mysore with Fr. Jasoone, Parish Priest of St. Francis Xavier church, looked for a more suitable place. A large plot opposite St. Johns church was purchased in 1891 and the foundation for the new school was laid on 24th Feb 1892. Fr.Bareille supervised the construction of the building until its completion. The cost of the two-storey building was Rs. 12190/-. All the wood needed for the building was obtained from the government by Mr. Thamboo Chetty.

The building was completed by the end of 1893. The number of pupils was 47. There were three teachers, Head Mistress, Mary Powell, teachers Elizabeth Buckley and Harriet Buckley. On 9th September 1890, Sr. Julie Marie was appointed the Headmistress of SFX School. She asked for the grant-in-aid received from 1882, to be raised from Rs. 23 to Rs.100 per month. The grant of Rs.50/- was sanctioned with effect from 1st April 1893. There were 124 pupils on the roll. Twelve of them were in middle school. There was a staff of 5 European teachers and two assistants.

Evolution of the school

A school that was started on 3rd June 1889 with 60 pupils soon grew in numbers. In 1916 it was raised to a High school and on 5th Oct 1917  it was affiliated with the Board of Education following the ICSE. The number of students then was 1050. Permission to open the SFX boarding was given on 21st August 1923. This was a school mainly intended to provide education for the European and Anglo-Indian children of the Cantonment area. A free primary school built by the Govt. was later attached to SFX where the Anglo-Indian children who could not pay fees were educated. They were later admitted to the High school. By the end of 1947 the European character of the school faded giving way to predominantly Indian students. Yet the policy of the sisters of SJT was to take special care of Anglo-Indian children whose mother tongue was English. We still have children from this community.

From 1923 till date the school has grown by leaps and bounds. We have also added new building blocks to accommodate more students. We are backed by a team of highly qualified staff, from the Preparatory to the ISC section. We admit children from all sections irrespective of class, caste, or religion. The total number of students at present is 2220.

Being the first institution of the Sisters of St. Joseph of Tarbes in India, SFXGHS has marked 135 years of its existence as well as its service to society in the field of education. It is a standing testimony to a rich and long tradition of selfless service to society and the nation at large.

SFX is a tree, a jocund congregation of green symbolizing renewal, growth, and hope. Its slender but strong branches are its teachers facing ever upward towards a brighter tomorrow. Its massive upstanding trunk is its infrastructure. And every single one of our children is one among its many lush green leaves dancing to the moves choreographed by the gust of knowledge.

Today, this Tree of knowledge has indeed reached inconceivable heights.

The Congregation of SJT - Creating Milestones in Education

The congregation of the Sisters of St Joseph Of Tarbes has lived in communion and staunch faith in God ever since its conception in 1843. Over the years, they became sensitive to the needs of the people around them and responded enthusiastically to their call to educate children, care for the sick, and to undertake many other forms of service according to the needs of the people around them. Their main aim in education was to ensure the Christian formation of youth and to instruct the poor.

The Charism of the Sisters of St Joseph of Tarbes has always been, “Rooted in the love of the Father, the Son and the Holy Spirit we are called together, to be for God and to be for others, to live and build Communion in our communities and in the world.” 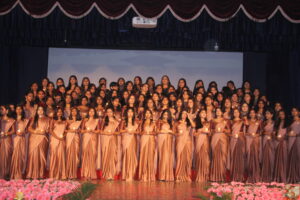 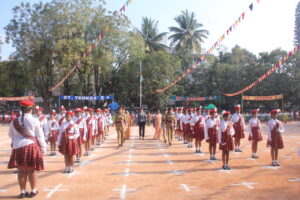 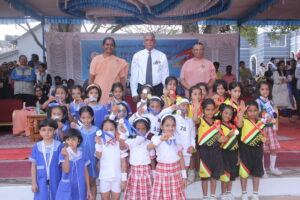 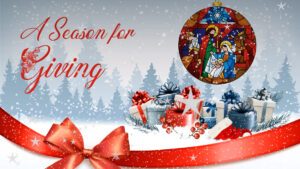 MUSICAL – THE SEASON OF GIVING 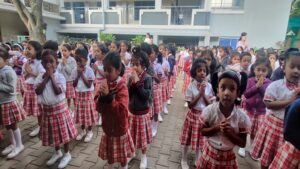 The kindergarten for a child is the important stage where he/she learns and practices skills. 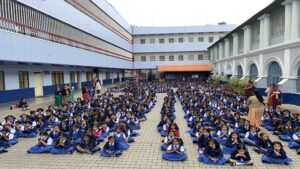 Primary School education is the step that lifts them towards their academics and other extra curricular skills. 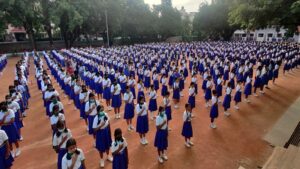 The education period where the students need to prepare themselves for the best outcome in the exams. 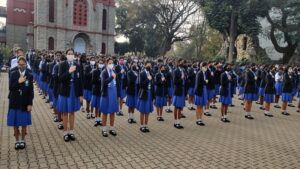 The load of hard work and efforts comes to an end in high school. The students really need to showcase the efforts he/she did all these years.

SFX- a safe, warm loving place. I can honestly look back and say that for most of us, the school played a huge role in making us the hard working, disciplined and respectable young women we are today.
Michelle BakesBatch of 2006
Our SFX school life in a nutshell? Well they were the best years of my childhood. The teachers we had were wonderful and lived up to the age old belief that they take the place of parents at school. I must add that the fact that we girls have kept up our friendship from the age of eight till now at sixty five, speaks volumes for our school atmosphere and the strong bonds that were cemented. Mention must be made that several SFX girls have been very successful in life. Three cheers to our dear St. Francis Xavier Girls’ High School Forever!!
Usha Naidu JeromeBatch of 1963
When I was in grade 9 my mom underwent a brain tumor removal surgery, I was completely down but my Xavierite family stood by me. When my mom's surgery was going on my entire school was called for an assembly and was asked to pray. All my teachers were with me during this period especially Miss Rajeshwari my Hindi teacher who took care of me like my mother. I don't live in India but whenever I come down I visit my school and tears flow down my cheeks when I think of my wonderful days at school.
Maria LeenaBatch of 1993
What I learnt at SFX- To be a leader as well as a member of a team’ To be competitive but not cut throat, To be sporting and gracious, both on and off the job. To play the game of life for the sheer love of it.
Jacqueline ColacoHead Girl, Batch of 1964
The dream school every girl would strive to get in. The very name brings a flood of memories and deep sense of nostalgia.
Shania MaryBatch of 2013
Batch of 1974 SFX- Those were the best years of my life. Thanks to what we were taught, I have been able to lead an organized life, think outside the box and treat people with respect.
Nirmala Gomes SequiraBatch of 1972
I take huge pride in being a former Xavierite. Everything that I take pride in now, has its origin in SFX. A BIG 'Thank You' to all the teachers who helped shape my life.
Tara Nagaraj
Looking back over the years, I have realized that this school did not just help me develop my capabilities but moulded and shaped my mind, while preparing me for the greatest examination- Life.
Kumudini RavindraBatch of 2007
I am now a musician and I can say that love of music and singing was instilled in me by Mrs. Van der Veen. Our school and teachers gave us a wholesome education with a lot of emphasis on co-curricular activities. I would like to thank SFX for giving me some of my best years in life.
Tanvi Rao
Learning was such a nice experience in SFX as we had a great set of Teachers, strict, but caring & values based.
Chitra Nanjunda CariappaBatch of 1968
School was like my second home! I never even dreamt of leaving school It felt like this routine was going to continue forever! It suddenly ceased and it was hard to find a new home.
Shambhavi PrabhuBatch of 2013
The best years in school, gave me a chance to dance with the culture club, sing with an awesome choir and take part in sports. Forever thankful and grateful.
Beverly Marie OtterBatch of 2004
Previous
Next

Through the ages, the sisters persevered in their mission with faith in God heroic courage and optimism, even in moments of great difficulties, opposition and challenges.